The second World War had started in 1939 and using the justification of the war, the British government in India put in force draconian measures and suppressed basic civil liberties.Also people were facing hardships due to rising prices and war time shortages.
The Congress Working Committee at its meeting in Wardha on 14 July 1942, accepted the idea of launching a nation-wide struggle, and on 8 August 1942, the AICC session was held at Gowalia Tank in Bombay to pass a resolution to that effect.
Read More 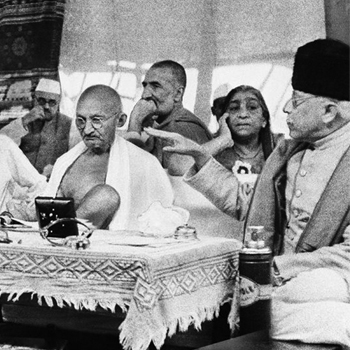 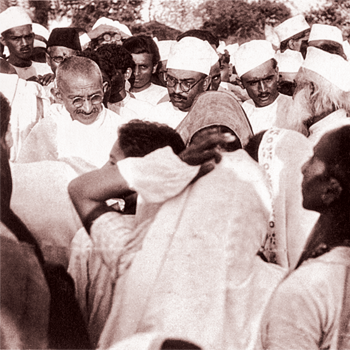 The Lahore Session (Dec 1929) of the Indian National Congress declared total independence or Purna Swaraj as its objective and in February 1930 Gandhi was given full powers to launch a Civil Disobedience Movement at a time and place of his choice.When Gandhi's 11 demands made to the Viceroy Lord Irwin were completely ignored, it was then that Gandhi decided to launch a Civil Disobedience Movement by breaking the Salt Law
Read More

Gandhi launched a non-violent Non-Cooperation Movement on 1 August 1920. On 2 February 1922, a group of well-organized volunteers was picketing in the local market against liquor sales and high food prices in Chauri Chaura, in Gorakhpur district of U.P.
The local police deliberately provoked the volunteers by beating up the volunteer leader, an army pensioner named Bhagwan Ahir, and locking him and several others in the local chowki.
Read More

" Silence is the best answer to anger. "

" Poverty is the worst form of violence. "

" An eye for an eye will make the whole world blind. "

" Victory attained by violence is tantamount to a defeat, for it is momentary. "

" Violent men have not been known in history to die to a man. They die up to a point. "

" Intolerance is itself a form of violence and an obstacle to the growth of a true democratic spirit. "